By Douglas Horne, author of Inside the Assassination Records Review Board

In the previous article in this blog, I stated that I believed I had discovered film evidence of a bullet hole in the windshield of JFK's limousine, in B-roll footage from the suppressed History Channel DVD, "The Smoking Guns."

After consultation with numerous friends in the JFK research community, I am now persuaded that the bullet hole I see in glass during this program, in the two seconds of B-roll footage (between approximately 14:02 and 14:04 in the program), is in the driver's side window, not the limousine's windshield. I've reached this conclusion after repeated study of a wide range of photos taken of the Kennedy limousine that day in Dallas.

I am not inclined to delete the previous post because I believe the public discussion of the overwhelming evidence of a windshield bullet is a useful one. I STILL AM ABSOLUTELY CONVINCED THERE WAS A THROUGH AND THROUGH HOLE IN THE WINDSHIELD. (I now acknowledge that the windshield is simply not shown in this B-roll footage, that's all---only the driver's window is shown.)  I don't mind allowing my readers to see what it was I was looking at in the B-roll footage, and to see for themselves how I could have made this mistake in interpretation.

The important thing here is NOT that I made a mistake in evaluating where this bullet hole is located; the important thing here is that this is still very important evidence of AN ADDITIONAL SHOT that impacted the JFK limousine on the day of his assassination, thus further destroying the lone assassin myth.  I'm still absolutely convinced that I am looking at a bullet hole in this B-roll footage.  The apparent bullet hole I am discussing is highlighted in each screen shot image below with an arrow. 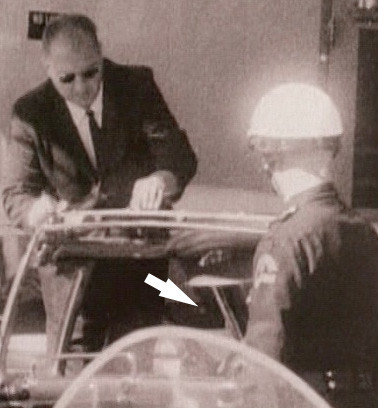 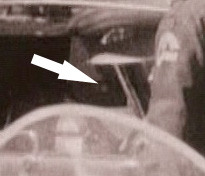 I wish to remind anyone reading this post that in order to properly evaluate this visual evidence, one must obtain the suppressed DVD itself (on Ebay, or from a friend), and then view the program "The Smoking Guns" on a large screen HD television.  (Watching the program on a U-Tube segment doesn't cut it; the resolution is inadequate for the task.)  I used a 52" SONY Bravia television; many televisions today are much larger than this, and should provide an even better view of this B-roll footage.

And remember, the two screen shots shown here are provided simply to help the reader locate where the apparent bullet hole is in the DVD B-roll footage; these are not the "defining images."  You will only be able to view the "defining images" on a large screen TV.  The two seconds of time in which the apparent bullet hole appears yields many, many video frames in which to examine it.  Each video frame yields a slightly different quality (sharpness) of image content, but the anomaly never disappears, and its location never changes, in the B-roll footage.

What I see when viewing this anomaly on a large high definition television screen is a perfectly round hole (a dark spot) that has a frosted circumference, surrounded by a much larger stress ring in the glass.  It reminds me of what I see when looking at a crater impact on the moon, or a BB hole in a pane of window glass---in other words, a high velocity impact in a hard surface.  Even in these screen shots, in the limited resolution shown here, one can see part of the larger stress ring surrounding the hole in the glass.

Multiple hypotheses about where this bullet originated are possible, and I will leave that to others.