Midnight Writer News has posted an article about the crucial original document I just obtained from the British National Archives.

Here is the link: http://midnightwriternews.com/document-further-validates-hornes-back-door-to-war-thesis-regarding-fdr-and-pearl-harbor/

Below you will find the digital scan of the actual, original document that is so ably discussed in the
Midnight Writer News article written by S.T. Patrick (see link above):

The red marginalia is Prime Minister Churchill's writing, and the green marginalia is that written by
"C", Sir Stewart Menzies, the head of MI6 and the defacto head, therefore, of signals intelligence for
Churchill. 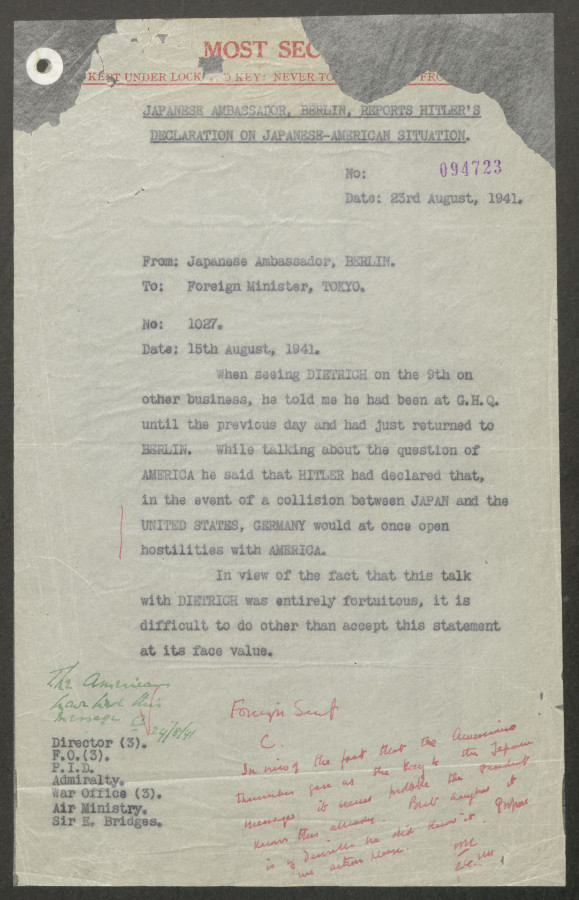 The Americans also decrypted and translated the same message, and proof of this can be found in the Volume III Appendix, page A-400, of the DOD publication "The MAGIC Background of Pearl Harbor."

Here is a link to a PDF copy of the American version of the British intercept, posted by S.T. Patrick at Midnight Writer News: http://midnightwriternews.com/american-version-of-decrypt-validating-horne-thesis-pdf/